Tedros Adhanom Ghebreyesus: The Ethiopian at the heart of the coronavirus fight - GhanaSummary News

What a challenge to be the head of the World Health Organisation (WHO) in the time of the coronavirus.

This is the lot of Ethiopian Tedros Adhanom Ghebreyesus, the first African head of the WHO, who took office two-and-a-half years ago promising to reform the organisation, and to tackle the illnesses that kill millions each year: malaria, measles, childhood pneumonia, or HIV/Aids.

And yet, while the WHO is undoubtedly working hard on those illnesses, Dr Tedros' time in office has been dominated first by Ebola in the Democratic Republic of Congo, and now by Covid-19.

Both have been declared Public Health Emergencies of International Concern, or PHEICs.

That means they require 24-hour monitoring, deployment of medical staff, equipment and medicines, daily discussions with affected countries and countries who might be affected, and of course, a steady stream of reliable information for an anxious world desperate for immediate answers.

"Charming" and "unassuming" are some of the words those who know him use to describe the 55-year-old. 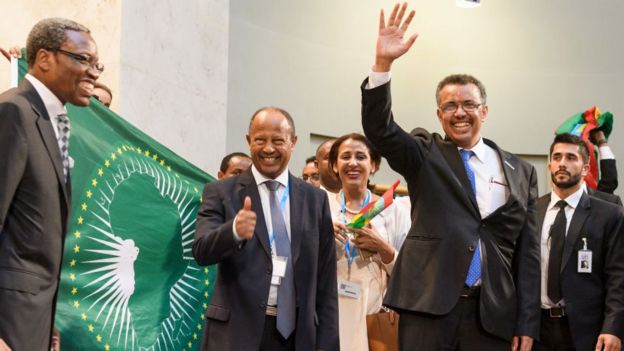 In 2017, Dr Tedros became the first African to lead the WHO

At his first press conference as WHO director general, the Geneva-based journalists were somewhat bemused by his manner.

He strolled in smiling, sat down and chatted in a very relaxed way, his voice sometimes so quiet it was difficult to hear him. That was a very big change from his more formal predecessor, Margaret Chan.

And yet behind that quiet manner there must lie a very determined man.

Before becoming head of the WHO he climbed through the ranks of Ethiopia's government, becoming health minister and then foreign minister. He could not have risen that far by being self-effacing.

Dr Tedros was born in 1965 in Asmara, which became Eritrea's capital after independence from Ethiopia in 1991, and grew up in northern Ethiopia's Tigray region.

One formative, and now motivating experience, was the death of a younger brother, who was around four years old at the time, . Later, as a student, Dr Tedros came to suspect it was measles that killed him.

"I didn't accept it; I don't accept it even now," he was quoted as saying, adding that it was unfair that a child should die from a preventable disease just because he was born in the wrong place.


"All roads should lead to universal health coverage. I will not rest until we have met this," he told the World Health Assembly shortly before his election as WHO chief.

Dr Tedros became a member of the Tigray People's Liberation Front (TPLF), which was in the vanguard of the 1991 overthrow of Ethiopia's Marxist dictator, Mengistu Haile Mariam.

As a government minister from 2005, he was seen as more approachable and friendly than some of his more austere TPLF comrades.

He has been praised for reforming the health sector and improving access to health care in Ethiopia, Africa's most populous state after Nigeria.

But when he was in charge, his ministry was known to discourage journalists from reporting about suspected cholera cases in the country.

During his highly efficient and ultimately successful campaign to lead the WHO, Dr Tedros' supporters dismissed allegations that he had covered up cholera outbreaks.

That is why "persuasive" and "political" are also words which crop up regularly when discussing his leadership of the WHO.

He knows that the WHO's success tackling global health crises depends on the co-operation of the organization's 194 member states. 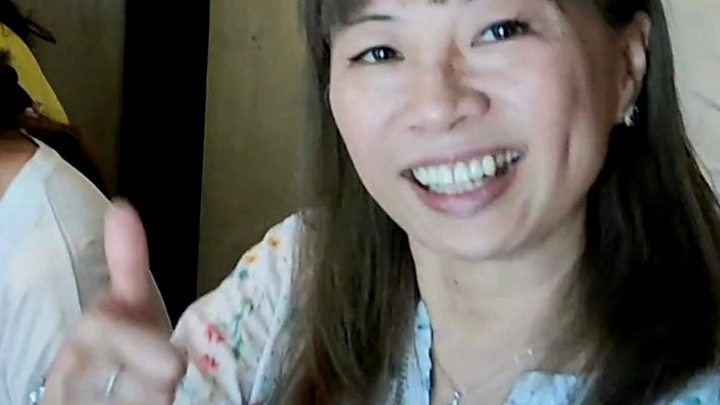 Julie, who lives in Singapore, was diagnosed with coronavirus and then put into isolation

During the current Ebola outbreak in DR Congo, he has travelled there several times, not just to see the situation but to also talk to government leaders. And he moved quickly to visit Beijing when news of the coronavirus outbreak emerged.

"His strategy is to coax China to transparency and international co-operation rather than criticising the government," says Lawrence Gostin, Professor of Global Health Law at Georgetown University.

But has that actually worked?

Some WHO watchers have criticised the effusive praise heaped on China for its containment measures.

After his trip to Beijing, Dr Tedros said China had set "a new standard for outbreak control".

A few days later, he told world leaders meeting at the Munich Security Conference that China's actions had "bought the world time". 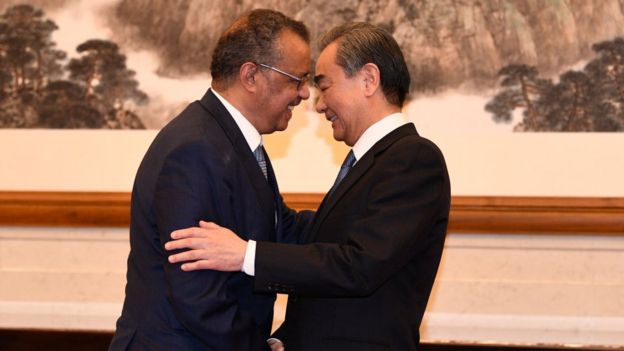 Such comments sit uneasily with the knowledge that China arrested health workers who first raised the alarm about the outbreak.

There is criticism too that Dr Tedros waited too long to declare a PHEIC.

"I was one of the first to ask him to call a PHEIC," says Prof Gostin. "Having said that, it was only a short delay and I don't think the timing had any impact on the trajectory of Covid-19."

"I do worry quite a bit however that his effusive praise for China could in the long term tarnish the WHO's reputation as a trusted scientific authority willing to speak truth to power."

So while Dr Tedros may be political, a lot of that political effort seems to be spent reassuring authoritarian, untransparent governments, in a bid to get them to work with the WHO to tackle diseases which threaten global health.

When it comes to perceiving how that effort may be viewed by governments in Western democracies, his political skills may not be quite so sharp.

, saying he had worked to make Zimbabwe "a country that places universal health coverage and health promotion at the centre of its policies".

Only after days of outrage, not just from governments, but from human rights groups, who pointed to the deprivation that Mr Mugabe's regime had inflicted on its people, did Dr Tedros decide to withdraw his proposal.

'Pitiful funding for WHO'

Now, in the midst of a global outbreak of a brand new virus, his judgement is being questioned again.

Some want him to declare a pandemic, others, including senior officials at the WHO, point out that it is only a word, and making the declaration would not change the WHO's strategy to contain the disease.

Then there are virologists and epidemiologists, some of whom say the WHO's advice to member states to adopt "robust, aggressive" containment measures is too feeble, and others who say the WHO is over-reacting.

We have been here before. Dr Chan was criticised for a perceived overreaction to the 2010 swine flu outbreak, over which she declared a pandemic and advised countries to spend millions on medicines most did not, in the end, need.

Then she was seen to react far too slowly to West Africa's catastrophic Ebola outbreak, which claimed at least 11,000 lives.

Prof Gostin believes Dr Tedros has become "the symbol of leadership" in the course of the coronavirus crisis. But, he warns, the WHO's "fundamental weaknesses are still there, including pitiful funding".

The success of Dr Tedros, and the WHO as a whole, at handling the coronavirus will not be really clear until the crisis is over.

For now, he will keep on advising countries to prepare, to diagnose, to trace, and to contain.

Every day he gives a press conference, every day his words are flashed around the world. And despite the pressure to come up with answers, despite the constant media spotlight, he remains quiet and friendly.

The end of each press conference is always the same; a gathering of papers, a smile, and "see you tomorrow". 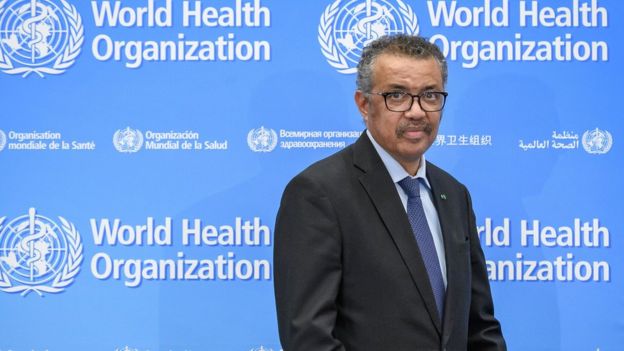