Once the Democratic Republic of Congo's sworn enemy, Kagame joined Tshisekedi and Angolan President Joao Lourenco for a central African mini-summit ahead of the long-awaited tribute.

The three vowed to "strengthen the Congo-Angola-Rwanda axis" to "wipe out Congolese and foreign armed groups," a joint communique said, apparently referring to brutal militias which plague the DRC-Rwandan border.

Tshisekedi died in Brussels in February 2017 at the age of 84.

He was a revered figure in the opposition for his resistance to former dictator Mobutu Sese Seko and ex-president Joseph Kabila.

He never got to see his son ascend to the presidency, after bitterly-fought elections at the end of last year that led to the first peaceful transition of power in the country's history.

His body was flown back to Kinshasa on Thursday aboard a private jet, ending a protracted battle by his family to secure its repatriation.

The coffin was displayed at the 80,000-seater Martyrs' Stadium in Kinshasa ahead of a mass in the evening. The funeral will take place on Saturday, at a mausoleum at Nsele, on the outskirts of Kinshasa.

However, the turnout was a far cry from the vast crowds and fervour the older Tshisekedi was able to muster in his heyday.

Several thousand people accompanied the hearse from the morgue to the stadium, and the venue itself was only half-full, AFP reporters said. 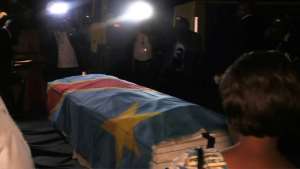 Kagame, who is also current head of the African Union (AU), last visited Kinshasa in 2010.

Relations between Rwanda and the DRC have been chilly since the 1990s, when Rwanda invaded the country to back rebels trying to overthrow Kabila's father, former president Laurent Kabila.

Despite an improvement in tone since Tshisekedi took over January 24, ties remain troubled by cross-border attacks on Rwandan forces by the Democratic Liberation Forces of Rwanda (FDLR), a rebel group based in the DRC.

The DRC, meanwhile, has accused Rwanda of pillaging coltan, a lucrative mineral used in electronic products, in the border region of North Kivu.

Etienne Tshisekedi served as interior minister under Mobutu before joining the opposition, where he was a persistent thorn in the dictator's side.

He co-founded the Union for Democracy and Social Progress (UDPS) in 1982 after a stint in prison and in the 1990s was appointed prime minister several times, each time falling out with Mobutu after a matter of months or even days. 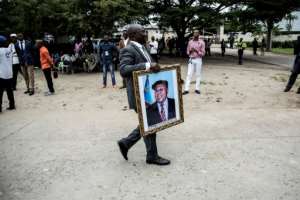 He boycotted the country's elections in 2006 on the grounds of fraud, and was beaten in the 2011 ballot, which was tainted by massive irregularities.

He died in Belgium, the former colonial power, where he had gone to seek medical treatment.

His son had vowed to repatriate his father's remains and bury them in his home country, but that wish was thwarted under Kabila.

The funeral has prompted tributes from fellow opposition figures as well as Kabila supporters.

Martin Fayulu, another opposition figure who says that a behind-the-scenes deal between Felix Tshisekedi and Kabila robbed him of election victory, paid tribute to Etienne Tshisekedi's "fight for justice and democracy."

Praise also came from Kabila's own party, the Joint Front for Congo (FCC).

However, Kabila did not attend the stadium tribute, nor did Fayulu and another Kabila rival, Moise Katumbi, who returned to the country from self-imposed exile on May 20.

Re: A Konkomba Student Calls For The Arrest Of Blakk Rasta Over The Konkomba-Chokosi Conflict

"It's a big disgrace to get pregnant and give birth out of wedlock" – Gospel act, Diana Asamoah