The Member of Parliament (MP) for Adansi Asokwa, K.T. Hammond says some media houses deliberately misreported his comments on the security deployment to parts of the country by the government.

He feels they were trying to cause him “extraordinary political and social disaffection with Ghanaians from the Volta Region”.

“This is a deliberate, malicious, shameless twist of my responses with the sole purpose if causing me extraordinary political and social disaffection with Ghanaians from the Volta Region,” he said in a statement.

The Adansi Asokwa lawmaker has been taken on by some members of the public over what they say are his unsavoury comments about the people of Togo and their relationship with residents in the Volta Region.

But Mr. Hammond reminded that he is old enough to know Ghana’s history and knows the implications of making such comments.

“It is clear beyond argument that in my responses in the interview, at no point in the 4 minutes’ segment did I suggest let alone state that Ghanaians from the Volta Region were not Ghanaians”.

He further said he has taken steps to report the said media house to the National Media Commission.

Meanwhile, on the same deployment of issues, the President, Nana Akufo-Addo, on Monday, June 29, 2020, said the security personnel are to protect the country’s borders.

“The longstanding deployment of security personnel, especially the military, along our borders is another dimension of this process of guaranteeing the peace of the nation. To shore up our borders against such attacks, and to defend our nation’s territorial integrity, the Armed Forces, at least since I came into office, have been very proactive in engaging in operations to secure our borders and foil any potential terror attacks on our soil. Deployments of soldiers in areas along our borders have been regular, and residents living in border towns will bear testimony to this,” he said. 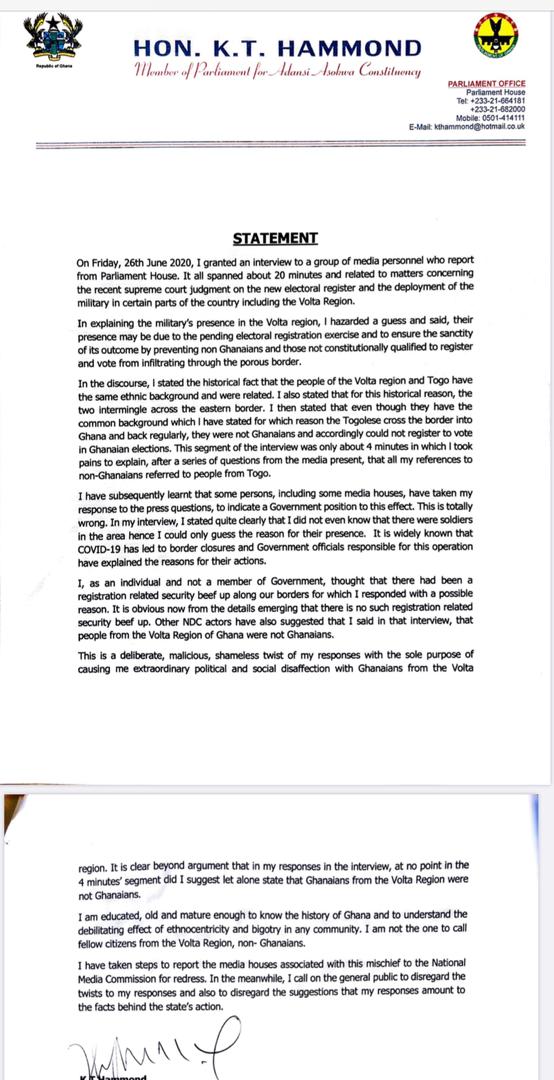